The Canadian province of Manitoba is known for its multicultural and diverse population, safe cities, and clean air. Also, there are more than 200 varieties of languages that are spoken across Manitoba and lives a better life in Manitoba.

Moreover, Manitoba offers free public education and healthcare benefits to the residents. The province has been welcoming new immigrants for more than a century now, contributing to the country’s economic development.

Winnipeg is the capital city of Manitoba, which is home to nearly 762,000 people. Furthermore, the average housing costs in Winnipeg is one of the lowest among all the provinces and territories in Canada.

Not only is Manitoba an affordable province, but also there are many local attractions, entertainment options, and, most importantly, numerous employment opportunities for the residents in the province.

Are you also planning to move to Manitoba? Discover all the factors to get an idea about how life is in Manitoba.

Location and Climate in Manitoba

Manitoba is one of the Prairie provinces that has rolling hills and grasslands. The province has some freezing winters and pleasant, warm summers.

Manitoba has humid summer days, due to the Gulf of Mexico on the south. Manitoba is the warmest and sunniest of all the provinces, with clear blue skies, specifically during spring.

Manitoba is bound by the province of Ontario and the other prairie province, Saskatchewan. Moreover, the province has a varied geography, including more than 80 provincial parks offering a great outdoor experience. 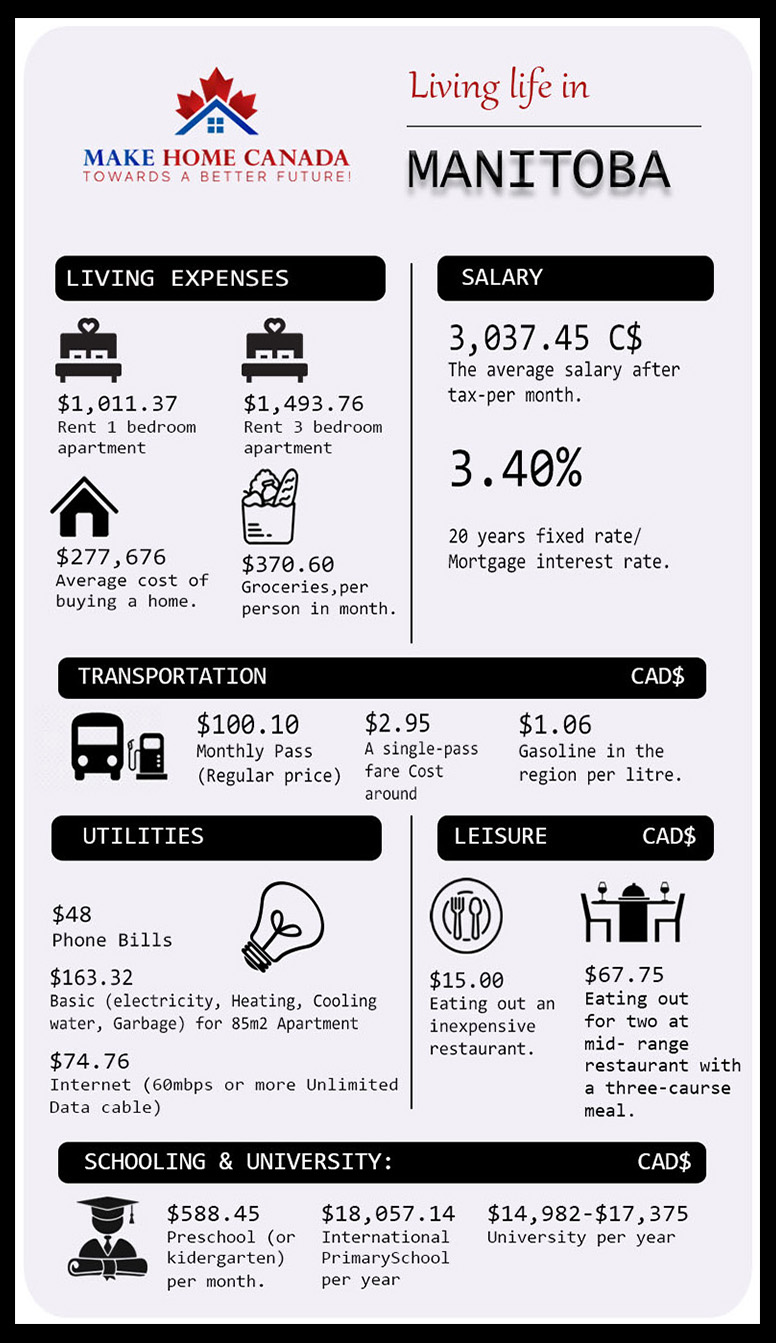 The average housing costs in the province are as low as $222,000, making it an affordable option to buy a house. Moreover, Manitoba offers home loans to first-time home buyers and low mortgage rates for homeowners.

Manitoba is an ideal option for newcomers, who are willing to have a high standard of living but at an affordable price tag.

Since 2017, Manitoba has the lowest unemployment rate as the province has many diverse industries creating numerous jobs. Here are the best and biggest industries that Manitoba supports:

Manitoba has one of the largest Aerospace industries in Western Canada that employs more than 5,300 experts in aerodynamic fields and exporting goods worldwide.

The agricultural sector has always been essential in the province as most of eastern central Manitoba is fertile. Over 250 companies in Manitoba are dedicated to food industries, which range from the production of crops to equipment.

Moreover, the province has introduced the Farm Investor Pathway. This new immigration stream enables the province to welcome more skilled workers to immigrate to Manitoba to boost the farming industry.

The construction industry is another major industry in the province. There was a rise of 4.7% in the labour income in the year 2017, making a take-home compensation of CAD 41,000 per annum.

Furthermore, the province has observed the growth of housing markets with the arrival of new immigrants, and it seems that this business is ever-expanding.

The province of Manitoba is also one of Canada’s biggest venues for organizing cultural events. Some of the most memorable events from the list are the Winnipeg International Jazz Festival, Manitoba Stampede and Exhibition, Dauphin’s Countryfest, Pride Winnipeg, and the Fringe Theatre Festival.

Manitoba is also popular as one of the most eco-friendly places in Canada, due to the province’s focus on clean energy and sustainable development. The province is further working to develop wind power and geothermal energy to ensure the supply of long-term clean energy across Canada. Over the next 10-15 years, the province has planned to make a further investment of CAD 15 billion in hydroelectric projects.

The retail industry employs more than 66,700 people, that is, 7.3% of the economy of Manitoba, making it another significant industry in the province.

Manitoba is a popular province because of its diverse population, belonging to different cultures and ethnicities. As mentioned before, the province has over 200 different languages, but French and English still top the chart.

The province has further developed settlement and language training support programs to assist newcomers and their families in integrating with the local communities.

There are numerous communities across the province, and all of them would be happy to welcome new immigrants to the community.

For international students, the province has five impressive options, out of which four are in Winnipeg. These are:

The only French-speaking campus is:

These are the prices of a few courses with 18 credits for international students who are willing to study in Canada as undergraduates:

The University of Manitoba offers a more diverse curriculum in different fields of study:

Brandon University is full of educational opportunities as it offers many scholarships to international students under the below categories:

The university offer study programs in Arts, Science, Education, Graduate Studies, Health Studies, and Music. Moreover, the university has a community of student body, including 3,622 full-time and part-time students.

Historical places and natural beauty have made Manitoba quite an attractive place. Some of the popular attractions in Manitoba include:

The province welcomes over 15,000 immigrants every year to meet the workforce requirements. Moreover, the province was the first to launch the Manitoba Nominee Program, offering a pathway for an immigrant to become a permanent resident.

Through this program, the province targets skilled workers, entrepreneurs, and graduates with the right skills and experience to drive the province’s economy.

There are two main streams under which the MPNP invites skilled workers, these are:

However, the applicants under both streams must have a strong connection with the province, such as family ties or educational ties. If candidates have ties with the province and meet the additional eligibility requirements, then they will be issued an Invitation to Apply (ITA) for permanent residence in the province.

There are two streams under the MPNP to invite entrepreneurs, these are:

Entrepreneur Pathway is for qualifying business owners and investors, who have planned to start a business in the province within a two-year period.

Farmer Investor Stream is for the applicants who are willing to buy or start a farm in the rural regions of Manitoba. To qualify, candidates must have the eligible capital, experience, and ability to produce primary products.

Sign up now, and our expert immigration consultants will reach out to you with the custom-made and error-free pathways for immigration to Manitoba.